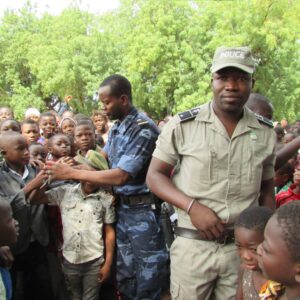 More than 100 representatives of the diplomatic community, the government of Burkina Faso, the country’s Defense and Security Forces and civil society will come together Jan. 21 in Ouagadougou to celebrate the growing relationship between the citizens of Burkina Faso and law enforcement around the issue of road security.

Hosted by PartnersGlobal and La Fondation pour la Securite du Citoyen (FOSEC), the Share Fair will highlight the success of the Roadmaps to Security project (Roadmaps) and the commitment of Burkina Faso’s government and citizens to work together to build trust and enhance road security, a major challenge in the country.

In addition to celebrating the achievements of Roadmaps to date, the event will encourage reflection and feedback from attendees, ensuring ongoing improvements to road security and continued cooperation around the issue. A panel of high-level government, law enforcement and civil society representatives will strategize particular approaches to help reduce national corruption and solidify the alliance between Defense and Security Forces (DFS) and civil society.

In recognition of the police and gendarmes’ efforts, the event will include a presentation of certificates of excellence. These certificates are awarded to the officials that civil society believed displayed outstanding service throughout the project. In addition, the Share Fair will hold theatrical and musical performances showcasing successes of the project in their communities.

The need to improve road security is vital in the nation’s current climate. Since April 2019, more than 250 citizens of Burkina Faso have been killed in summary executions and targeted attacks, primarily occurring on roadways. Armed groups, many of which have migrated from the neighboring countries, and armed robbers are the main perpetrators.

In efforts to seek protection, the number of internally displaced persons (IDPs) tripled in 2019 to almost 600,000. This mass migration has led to more people on roadways vulnerable to attacks. Law enforcement prevention of these attacks and response to road security incidents has lagged in recent years, leading to increased citizen distrust of security forces.

Funded by the U.S. Department of State’s Bureau of International Narcotics and Law Enforcement, Roadmaps is responding to this critical gap, working to improve citizen security through stronger collaboration between law enforcement, civil society, and national and regional institutions. The project focuses on enhancing road security through transparent and effective response mechanisms.

While Roadmaps has a significant focus on traffic issues, its efforts extend further, working with law enforcement and citizens on ways to prevent road security challenges triggered by violence, trafficking, corruption, lack of governance, and migration flows.

When it began in 2017, the project conducted surveys to establish a baseline for the public’s perception of law enforcement. It found that public trust in law enforcement was low and few government ministries had designated representatives on road security issues.

Today, political buy-in and support for road security efforts is up, with the Ministries of Defense and Security each designating a focal point for Roadmaps, and elements of the Roadmaps project included in the country’s National Security Policy. The project has created many opportunities for collaboration between civil society and law enforcement, such as community events and school visits, resulting in stronger public support for working with law enforcement.

Community involvement and success in Cinkanse and Po

While many achievements will be shared at the Jan. 21 event, the cases of Cinkanse and Po stand out for their progress.

Located along borders with neighboring countries, these two cities are particularly vulnerable to security threats including armed attacks, which can significantly disrupt livelihoods.

Throughout 2019, residents of Cinkanse and Po carried out 39 unique activities to improve security and increase citizen-law enforcement cooperation.

In both cities, Roadmaps conducted trainings for DSF officers on a new anti-corruption manual, which is based on previous DSF experiences and serves as a training module to prevent corruption and strengthen relations with civilians.

Check out news coverage from the event!