When refugee and host country kids sing together

The city of Beirut and its outlying impoverished suburbs are all too familiar with conflict. The remnants of Lebanon’s 15-year-civil war that killed 150,000 and injured 300,000 linger in an undercurrent of tension and unaddressed trauma. Some four decades after the heavily sectarian conflict ended, communities remain divided by religion and ideology.

Adding to the strain, wars in neighboring Syria, Iraq and Palestine have brought an estimated 1.5 million refugees to the country, many of them settling in and around the capital city. As neighborhoods have grown denser and resources thinner, tensions between host communities and new residents have peaked, inciting violence, distrust and more self-imposed segregation.

But amid the discord, 100 children ages 8 to 15 from Lebanese and refugee backgrounds alike raised their voices for something more powerful than the divides, joining the city’s first multiethnic children’s choir. Starting with a mutually known song and little else, these singers and their families would soon discover they shared much more than music, finding common ground in a deeply divided society.

We sat down with PartnersLebanon Director May Nasr, a well-known Lebanese folk singer, peacebuilding expert and lead of the Children’s Choir initiative to find out what made the program successful and whether its gains could be sustained.

PartnersLebanon decided to launch a choir as opposed to a sports league, dialogue or other activity. What does music offer that other activities don’t?

Nasr: I’ve seen from years of performing with my guitar that these old folk songs sung by famous musicians have become pillars of our musical culture, especially among the people of the Middle East and North Africa region, those in the diaspora and even among people who don’t speak the language. It’s about humanity, not just love songs. These songs bring people together.

There is something much more powerful about music than a training or a dialogue. Music is a fundamental starting point because it has that powerful, unanimous passion and empowerment that gives people motivation and hope. Singing is expressing with the whole body. And for children especially, music and psychosocial art (mindful well-being) processes can provide them with a way to express thoughts and emotions in a way that their current vocabulary cannot do.

In our region, everything is boiling: there are refugees and there is resentment among huge swaths of people against each other. We must still do the typical work that peacebuilding does, but we never actually tried using music.

A young soloist practices her lines at rehearsal.

What are the major drivers of conflict in Beirut especially among children and youth?

Nasr: In 2017, there was a case study in an impoverished area of Beirut (Borj Hamoud, Naba’a) with many displaced people, refugees and native Lebanese residents living nearby. Because of the surge of refugees, there was a surplus of students in school, and there was a noticeable difference in levels of education among refugee children and Lebanese children, largely due to the years refugee kids spent out of the classroom.

The schools split them into two shifts: Lebanese kids in the morning and refugee kids in the afternoon. When the shifts changed and students crossed paths, they clashed and started name-calling based on what they had heard from their families and adults in their communities. The Lebanese kids were being told that refugees are taking away their livelihood opportunities and that refugees shouldn’t be there, among other things. Children listen to this. They hear and it leads to conflict.

If we don’t address this dynamic starting with the children, we are in big trouble for the future. Children are like sponges and can be easily influenced by negative or positive influence. You just have to have something positive to give.

How did being part of a multinational choir change these kids?

Nasr: When we held choir auditions, even the kids with the flattest voices were so eager to join. We couldn’t turn them away! Based on my experience, there are no flat voices when they sing together. It somehow changes the pattern of the singing. Also, this was an opportunity to engage in a free-of-charge extracurricular activity in a safe location, as opposed to playing on the streets.

But more than the actual sound, we saw children’s perspectives on life and toward each other gradually began to change. When the project first started, a Syrian child asked me: “How are we supposed to sing with these kids who beat us up on the street?”

In our first session, we had chosen songs they would all know. The Lebanese kids were on one side of the room and the Syrian refugee kids were on the other. But when we started singing, they all looked at each other like: “How do you know this song?” Automatically you could see the barriers between them start to fall.

In the next sessions, bonds were building between them. After each session, they would all run out and play together in the school playground. We created a WhatsApp group chat with the choir members, teachers, and parents, and they started exchanging messages about songs and ideas. It was such a wow moment.

Did the impact of the choir extend beyond the members themselves?

Nasr: A key component of the project was not just to focus on the children but to think about what happens when the child leaves the training and goes home.

To help create a healthy environment at home free of the divisive attitudes toward “the other,” we set up a psychosocial/mindfulness wellbeing component for adult caregivers. While the kids attended choir practice, their mothers, elder sisters, and aunts took part in sessions on mediation, storytelling, and healthy eating, among other areas. They did this together—Lebanese, Syrian, Iraqi and Palestinian women side by side.

This made a world of difference. The mothers would go home and share what they learned with the kids who in turn would share their songs and experiences.

Outside of the families, we held a series of concerts around the country where audiences could see this diverse group of kids singing together, laughing together and bridging divides. 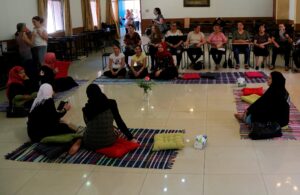 Mothers, aunts and elder sisters of choir members take part in mindfulness and well-being sessions while choir practice is underway.

What is the one thing you want every choir member to walk away with?

Nasr: We need to continue to cultivate this shared sense of humanity and identity and bridge our divides.

We want these kids to walk out of this project knowing that they can resort to music and singing techniques when they are down and beaten or stressed. They can always rely on their cultural memories and shared heritage for inner strength and self-confidence. This fact was forgotten among the many problems and wars in our country. We almost forgot what made us feel peaceful, but they can apply this after the project ends in their daily lives as they grow.

What’s next for the choir?

Nasr: In phase two, for which we are currently seeking funding, we plan to extend the choir up to age 20 so we incorporate older youth.

What is really exciting about our proposed next phase is that we plan to include a training of trainers element so youth learn how to create and lead choirs in their own communities. We aim to have several self-sustaining community choirs creating spaces for collaboration, dialogue and music all over the country.

We also plan to bring the lessons of mindfulness and wellbeing to choir members as well as the adults in their households. Wellbeing and psychosocial support will be an essential component of our next phase.

Could this model work in other places?

Nasr: It absolutely could work in other places and not just in places with turmoil and protest. Music brings back a spark in societies. It really does connect us on another level!

“The Children’s Choir: Life Skills Development through Music & Arts” was funded by the Drosos Foundation. PartnersLebanon is currently seeking funding to expand the choir to other areas in Lebanon and broaden its psychosocial outreach. For more information, please contact May Nasr at [email protected].